2015: Conservatives is the Right Choice

Whether or not you are a Conservative; Harper has done a good job running our country. What has he done wrong? He seems to scare people with the online surveillance bill. However when you really look at the bill or the law now, you should really not assume you are under the watchful eye of “big brother.” Bill C51 is nothing more than a safety measure, as opposed to some daunting online bill that will track your every movement. Does this bill give new measures to the police and security service in Canada. Yes it does, but I am sure the average Canadian didn’t even know we had an intelligence agency let alone a new bill to give them anti-terrorism measures.

The economy has improved drastically, and if you listen to the hooblah of the Orange party and Mister Rogers then you will hear we are in a recession or if not worse. Well, if you are to listen to the economic policies of either the Liberals or NDP our country would go down the drain quickly. Why mess with a good thing?

The aboriginals have fared better with Harper. He has decided to ensure that they are being accountable, a measure most native bands do not want, and why? They are raking in more money than Harper and even a CEO makes. They are doing good in terms of the environment as they have a voice and so does the government.

Our country should be totally behind in terminating the terrorist problem. However we have far left human rights groups opposing the anti-terrorist measures the Harper government has taking. We need to send more troops to wipe them out. We need to stop showing their propaganda videos online and we need more and more Canadians to step up to the plate and stop defending them. Why do people wish to defend islam? It is a sexually orientated religion that subordinates women and willing to kill off homosexuals. These are major elements in the human rights movements that the left have fought for, and now they wish to ignore this for the sake of defending a pedophile and murderous religion like islam.

If the left are allowed to win this election, our country will go into turmoil. If the Conservatives can maintain its course which will probably happen as it did in the UK, our country will continue striving in these tumultuous times.

The Unthinkable Coalition of the Far Left

It would be an unthinkable moment in Canadian politics if the Conservative s didn’t win reelection.  If the far left parties of Muclair and Trudeau were to get in chaos would ensue. Neither of them have the experience or leadership that Harper and his team possess.

First and foremost Trudeau was elected because of his name. If you recall his father was a pretty bad PM. He alienated the west, he centralized the wests oil. He alienated Quebec with his dubious dreams. He alienated the Natives. He had no real or profound foreign policy. He didn’t react quick enough to save a cabinet minister.  This was Trudeau Sr., Trudeau Jr. likened his leadership to that of a communist dictatorship. He jumps on the bandwagon and speaks foolishly.

Muclair who knows about him and the Orange Crush party. But to be fair to both Muclair and Trudeau that picture of them laughing together reminds me of Hitler and Stalin laughing before they double crossed each other. But both men have far left ideas that we as a society must move far away from.

If Harper and his strong team were stripped of government status, terrorism could strike hard in our country. Bill C-51 is a necessary bill to fight terror before it happens. The far left like Trudeau and Muclair are united in defeating that bill. They claim we would enter some dyspotic future where police would detain people at random and even a police state would emerge. There fear mongering is not only pure lunacy but it ought to be treated as such. They would rather have people like Omar Khadr out on our streets and even Pickton too. This bill isn’t tyrannical by any means. Has anyone read it? A real snoozer but it contains nothing that would create a police state. This bill worked in the United States.

The United States Patriot Act a similar bill has not turned America into a police state. No FEMA camps, no crazy Alex Jones conspiracy prisons, no 9/11 conspiracy and all the lunacy that went along with the Patriot Act. The left are afraid of necessary safety.  Our freeedoms or rights aren’t thrown out. I care about my freedom and our democracy, by no means would there be reason to support a bill that would take them away. Because when Bill C51 is passed there will be no dark skies or men in black uniforms coming at night.

There will be no cameras in homes or police state. The left have zero proof that any of this would occur. The US isn’t some police state, so why if even the UK who have similar measures why are they not a police state?

Supporting another Conservative term and this bill should be in our best interest. If the left would form government our economy would spin out of control. Harper and his team have done a good economic job. He has ensured stable industries. He has been a foreign policy leader. He stands upto real police and theocratic states. He has a strong team of vibrant Ministers and MPs who all stand behind their leader. Our environmental standards are increasing. Health care and social welfare is doing far better with his leadership.  Education, and employment has been on a steady rise.

If we are to dump Harper it would be a dangerous mistake.  Families and hard working people benefit under Harper. If you want corrupt union leaders or chinese communist lovers flirt with the left. 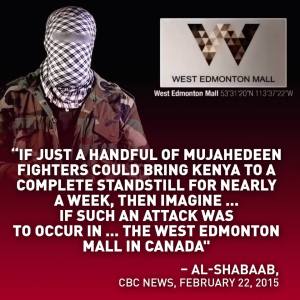 What do you think when you see this photo?

What comes to my mind are John Nuttall and Amanda Korody, Michael Zehaf-Bibeau and Omar Khadr. Khadr is now on home soil and wants to be released into the general public. Zehaf-Bibeau is dead, fortunately he was shot and killed before he could kill anymore people. It was also fortunate for RCMP to arrest Nuttall and Korody before they kill hundreds if not thousands in Victoria. Then there was Martin Couture-Rouleau who again like Zehaf-Bibeau shot and killed a Canadian soldier. Couture-Rouleau ran over two of them. I am not going to talk about Khadr, upon his release I hope the whole country turns on him.

We need more men, women and children like this good citizen:

“A Muslim woman dressed in a Burkha (a black gown & face mask) was standing with her shopping in a queue at the checkout. When it was her turn to be served, and as she reached the cashier, she made a loud remark about the Canadian Flag lapel pin which the female cashier was wearing on her blouse. The cashier reached up and touched the pin and said, ‘Yes, I always wear it proudly. My son serves abroad with the forces and I wear it for him. The Muslim woman then asked the cashier when she was going to stop bombing and killing her countrymen explaining that she was Iraqi.

At that point an elderly gentleman standing in the queue stepped forward and interrupted with a calm and gentle voice, and said to the Iraqi woman, ‘Excuse me, but hundreds of thousands of Canadian men and women, just like this lady’s son have fought and sacrificed their lives so that people just like YOU can stand here in Canada, which is MY country, and allow you to blatantly accuse an innocent check-out cashier of bombing YOUR countrymen. It is my belief that if you were allowed to be as outspoken as that in Iraq, which you claim to be YOUR country, then we wouldn’t need to be fighting there today. However – now that you have learned how to speak out and criticize the Canadian people who have afforded you the protection of MY country, I will gladly pay the cost of a ticket to help you pay your way back to Iraq. When you get there, and if you manage to survive for being as outspoken as what you are here in Canada, then you should be able to help straighten out the mess which YOUR Iraqi countrymen have got you into in the first place, which appears to be the reason that you have come to MY country to avoid.’”

There is no fear mongering when the innocent are attacked by ruthless people. There is no fear mongering when children are raped, tortured and beheaded. There is only truth, and the truth is, we shouldn’t fear them but hate them. We should make them feel not welcomed in this country. This is our enemy, not just the military or the politicians. This is our enemy, they have infiltrated our schools, our malls and even our families. They have threatened our way of life why fear, why not hate.

There is no such thing as islamophobia. If the Toronto Star a far left National Enquirer like paper wants to parade muslims around in a zoo so you can feel “happier,” so be it. I hate when a child is abused, I hate when a woman is raped, I hate when an innocent is killed. If you don’t hate the war crimes of ISIS and the insidious crimes of the followers, than perhaps put down bejeweled and read the paper. Hate for ISIS is love for your country.

Harper on the Right Side of the Veil

“I believe, and I think most Canadians believe that it is — it is offensive that someone would hide their identity at the very moment where they are committing to join the Canadian family,” he said.

“This is a society that is transparent, open and where people are equal, and that is just, I think we find that offensive; that is not acceptable to Canadians and we will proceed with action on that.”

Perhaps Harper may be playing politics, but he is 100% right on the Ishaq case. Ishaq a muslim who wants to become Canadian wants to not only cover her face, but to cover her entire body and conceal herself before becoming part of our family. For a new Canadian, think of it as being born. Does a baby come out veiled behind secrecy? Absolutely not. Would you allow your girlfriend that you first met hide under a paper bag? Maybe some you would, but pretty sure you wouldn’t want to.

This whole notion of multiculturalism has allowed the deviation of the muslim people to perpetuate this war on terror. They hide behind religion, while really wanting jihad. What about that couple who wanted to kill thousands of Canadians. Quite frankly, we shouldn’t allow any prisoner to use religion or their religious costumes in the courts. We are all equal under the law, so therefore we should look like it.

A niqbab is a product of sharia law, and that is a product of the Islamic State. My comments above are not directed towards the religious element, but the political ideology element.